My Five Days in Singapore

Last week I had been to Singapore with my parents for a short stay. On the first night of the trip, we stayed at Hotel 81 Dickson at Dickson Road near Jalan Basar. The room was booked online in advance before we started the journey, and it looked exactly the same as the picture shown online. The room size is huge and the bed size of each bed is wide enough to sleep two persons. That was good and those were the things I appreciated about the hotel, and the things that I didn't like were the tiny jail like window on the wall, the holes in the towels, the ants I found on the desk in front of the TV and no bath curtains in the bathroom! Well, it was only a budget hotel with reasonable price (around $170 Singapore Dollars), so I shouldn't have expected it too much. 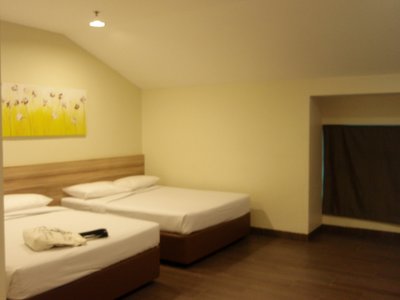 The Room at Hotel Dickson 81

The following day, we left the hotel and took a taxi to the Resorts World Sentosa. The Resorts World Sentosa in Singapore is a nice place for a short stay. There are attractions like the Universal Studio, Maritime Xperiential Museum, Crane Dance, Casino and its famous resident show - The Voyage de la Vie. There are three hotels to stay, Hotel Michael, Festive Hotel and Hard Rock Hotel. We stayed at Hard Rock Hotel cause it was the only available hotel we could make the reservation online. All others were fully booked. 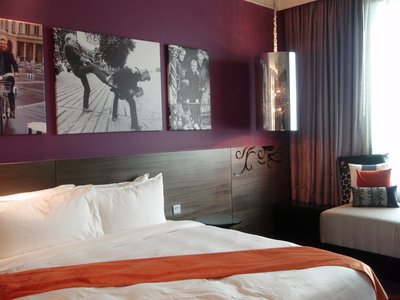 The staff who attended us was friendly and nice. She gave us a map of the resort and showed us the way to the entrance to the Universal Studio to collect the tickets of the show Voyage de la Vie we purchased online. I thought the distance between sites and attractions in the resorts were far away from each other, but they weren't as far as I thought they were. All the sites were within walking distance and the farthest one only take about 15 to 20 minutes to get there on foot.

For one one-day pass ticket costs $66 Singapore Dollars, including a $5 dollars retail voucher and a $5 dollars meal voucher to spend inside the Universal Studio. That was really good. 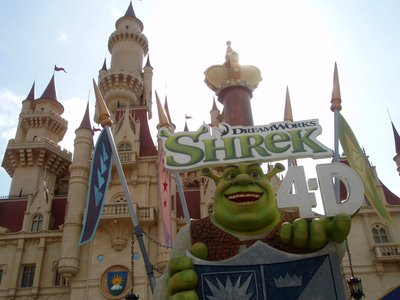 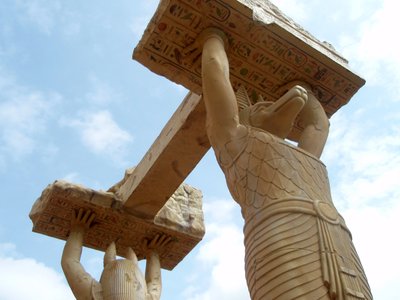 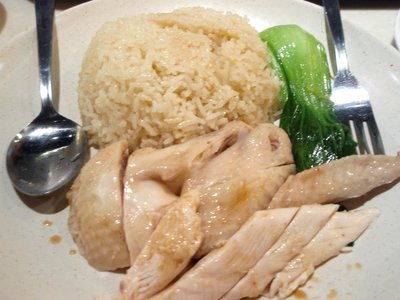 So, on the second day of the trip, we went to the Resorts World Sentosa, checked-in Hard Rock Hotel, bought tickets to Universal Studio for the following day, spent an afternoon at the casino and had dinner in a Chinese Restaurant. It was a relaxing day.

On the following day, we woke up at 8 am and walked to the Universal Studio.
As shown on the map, you can see there are seven themes in the park. Hollywood, Madagascar, Far Far Away, The Lost World, Ancient Egypt, Sci-Fi City and New York. The theme I liked most was the Ancient Egypt. Maybe I am attracted to Ancient Egypt culture so maybe that was the reason why I found Ancient Egypt site was more interesting. In the morning, we did the Shrek 4D Adventure and the Donkey Live at Far Far Away. We watched the Water World stunts show at the Lost World. After the stunts show it was already 1 pm, so we had our lunch at the Discovery Food Court. Chicken rice was my favorite dish, but the one serving at the food court was overcooked and tasteless, comparing it with the one I had before, it didn't taste as good as the one I ate at Jalan Basar at the first night I stayed in Singapore. Later, it started raining. Many people who didn't carry umbrellas with them had stayed indoors until the rain stopped. The bad weather had annoyed my parents, so they left Universal Studio when they could. I didn't want to leave that early, still places I haven't visited yet. So, they left and I stayed. I walked to Ancient Egypt site, I did the Revenge of the Mummy, an indoor roller coaster, then walked to Hollywood, and I stayed indoor watching a monster rock-n-roll musical performance in the Pantages Hollywood Theater. Later, I walked back to New York and got inside the Lights, Camera, Action, hosted by Steven Spielberg. After that, it was almost 6:30 pm. I left the park and met my parents for dinner.

In my general conclusion about the Universal Studio I visited in Singapore. It's worth to visit, because it's the newest in Asia, so the facilities, restaurants and shops there are clean and tidy. Moreover, they have $10 dollars vouchers to gift each visitor, and it is easy to walk around even without a map. On the other hand, I think it is too small, comparing with the other one in Osaka Japan, and the two others in Los Angeles California and in Orlando Florida.

At night, we went to see Voyage de la Vie. It is a theatrical circus spectacular, it tells the story of a young man discovering the lessons of life. It is a fantastic and magical performance that one must see if visit Singapore.

On the following day, we left the resort and took a taxi back to downtown. We checked-in the Hotel Gallery, then walked along the riverside and had lunch in a shopping mall. I ate chicken rice. After lunch we went to the Marina Bay Sands Casino. Marina Bay Sands, located next to the financial district, known as the second most expensive casino in the world. Its architecture is really great and awesome. And the person who created this stunning and vibrant structure is Architect Moshe Safdie.

This is the art piece I found in Esplanade Mall. 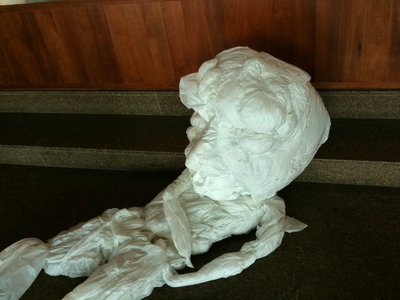 Dreaming of Dreaming by Khalil Chishlee 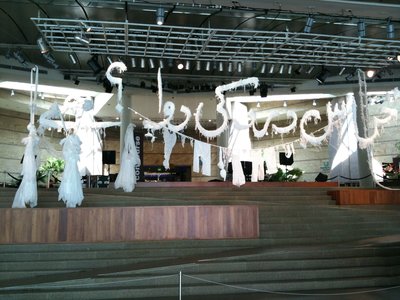 Dreaming of Dreaming by Khalil Chishlee at Esplanade Mall

Dreaming of Dreaming by Khalil Chishlee. The sculptural work of the artist mimes the ubiquitous plastic rubbish bag in the unlikeliest ways. Using robust yet slight material, he has created a series of ethereal figures suspended, almost floating in their exhibition space, yet formed with sculptural precision and great attention to detail.

Also, I visited Marina Square in that afternoon. After that, I walked back to Marina Bay Sands to meet my parents and we had dinner there. I ate chicken rice. Then, got back to hotel and the following day we packed up and took a taxi to the airport. 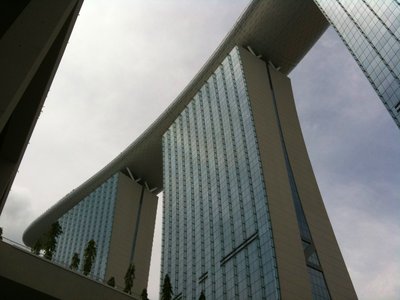 Posted by ristinw 06:37 Archived in Singapore