The Sound of Silence - Northern Territory of Australia

~ A place where one should visit once in a lifetime ~

The Sacred Site of the World

~ THE SOUND OF SILENCE ~

I hear the wind blow
on a naked desert land

Waking me up from a touch of your hand

In a touch I hear voices
They call to me ... with their tender voices
which make me look up while they are
Whispering in the sound of silence

In a dream I wake up
Touching the sound of silence"

Uluru, also named as Ayers Rock, is a large sandstone rock formation in the southern part of the Northern Territory of Australia. It lies 335 km (208 mi) south west of the nearest large town, Alice Springs; 450 km (280 mi) by road. Uluru is the major feature of the Uluru - Kata Tjuta National Park and it is a sacred site to the Aboriginals of the area. There you can find many springs, waterholes, rock caves and beautiful ancient paintings.

Uluru is 348 metres high, 3.6 kilometres long, 1.9 kilometres wide, and is 9.4 kilometres around. It is the second largest single rock in the world.
(The world's largest rock: Mt. Augustus in the Golden Outback region of Western Australia.)

Kata Tjuta, also known as The Olgas, are a group of large domed rock formations located about 365 km southwest of Alice Springs, in the southern part of the Northern Territory of Australia. The Olgas form one of the major landmarks within the Uluru-Kata Tjuta National Park.

From its name, Kata Tjuta, means many heads to the Australian Aborigines, is a group of more than 30 rounded red conglomerate masses of rock rising out of the desert plain. Some of the rocks are bunched close together with only narrow precipitous crevices between. Others, rounded and polished by the wind, are more spaced apart. The highest point, Mount Olga, is 1066 m above sea level, or approximately 546 m above the surrounding plain (203 m higher than Uluru).

Both of the landmarks within the Uluru-Kata Tjuta National Park are worth to visit once in a lifetime. If you are seeking something special and spiritual, this is a right place where you should go. There you can find many springs, waterholes, rock caves and ancient paintings, as well as you can find yourself, your soul and widely open your inner eyes. Be enlightened by the sound of the earth, get inspired by the bliss of the wind and be grateful to the solitary trees, they are just like guardian angels watching you every day and night.

I think nowhere else in this world but here in the Uluru-Kata Tjuta National Park I find peace and only peace, which makes me a stronger inner person that I could walk further...and further...
Every unfavorable memory in life seems so far away, and only peace remain. 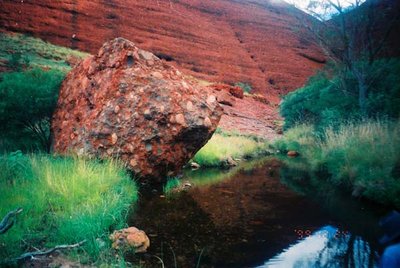 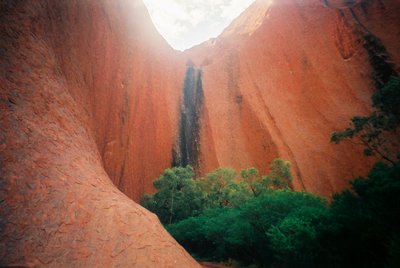 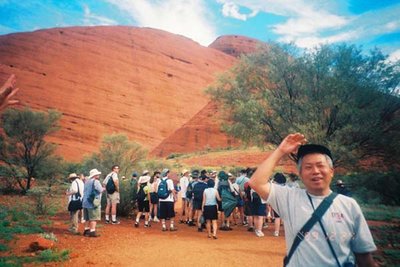 Just to let you know: @v@
It was the greatest christmas present I've ever had in my life :D

Posted by ristinw 04:05 Archived in Australia