China - A Short Trip to Hangzhou, Suzhou and Shanghai

~ in the Zhejiang and Jiangsu Province and between ~

HANGZHOU (杭州)
Hangzhou is the capital of Zhejiang Province (浙江省) in east China. With its famous natural beauty and cultural heritages, Hangzhou is well known as one of China's most important tourist venues.

"Above is heaven, below is Hangzhou." is a famous Chinese saying that describes this beautiful place. 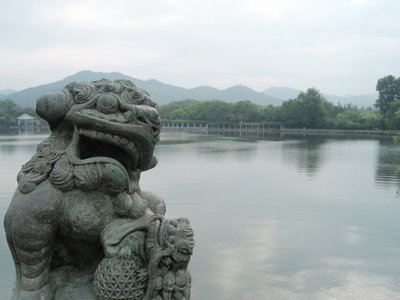 This is the famous "West Lake" (西湖) in Hangzhou. It is known to visitors for its scenic beauty as well as the moving legend which is said to have taken place there. 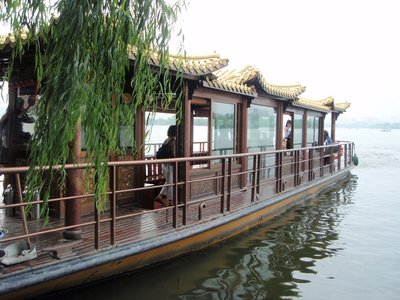 These are the words composed by the famous Song Dynasty poet Su Dongpo (960-1127) when he compared the West Lake to Xi Zi, the most beautiful woman in ancient China. These poetic sentiments leave one in no doubt of the glory of the scenery that inspired them. 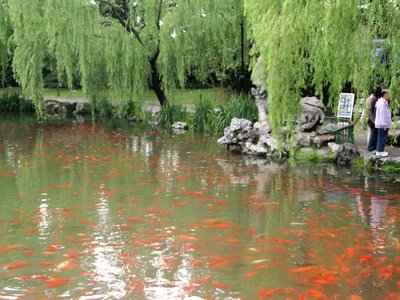 The Red Carp Pond is the heart of Viewing Fish at Flower Harbor Park and it is one of the ten places of interests around West Lake. Countless carps live and play in Red Carp Pond, fascinating thousands of tourists each year.
It is located in the west of South Su Causeway, Flower Harbor Park. Dates back to South Song Dynasty, it was a private garden near the Flower Hill, hence the name Flower Harbor. In the year 1699 Emperor Kang Xi of the Qing Dynasty visited West Lake and wrote "Viewing Fish at Flower Harbor," which was later inscribed on a stone standing near the fish pond.

At the first night in Hangzhou, we were happy to enjoy the famous Chinese Performance in the city center. 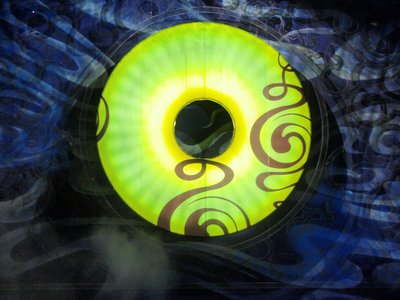 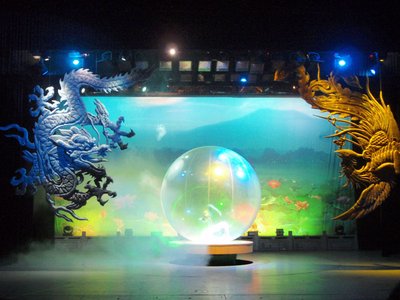 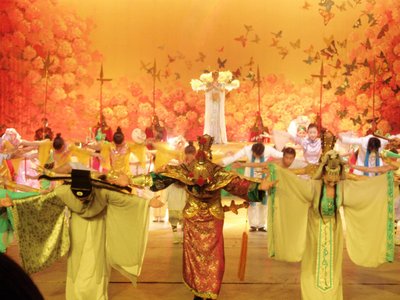 At the second day of the journey, in the morning we went to the Dragon Well Tea House to taste the world famous green tea. Dragon Well Tea (龍井茶) is favored by both local residents and foreigners because of its four unique wonders - emerald green color, aromatic flavor, sweet taste and beautiful appearance. If you wish for a healthy life, it is recommended to drink Dragon Well Tea everyday, because of its nutritional value and it has extraordinary effect on people's health. 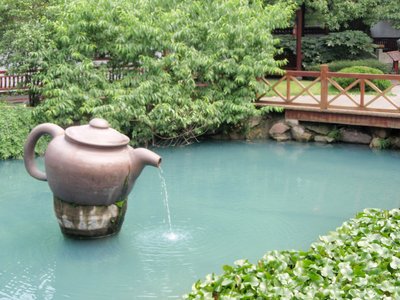 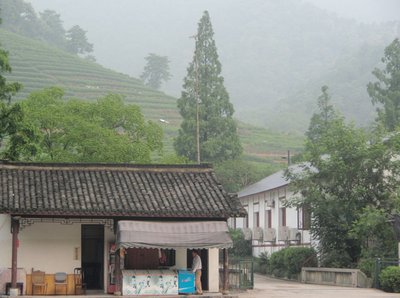 WUZHEN (乌镇)
In the afternoon, we went to Wuzhen (乌镇) which is known as the Lifeblood of Heavenly Cities.
About 80 kilometers from Hangzhou, Wuzhen is one of many small towns where people still rely on the river network. 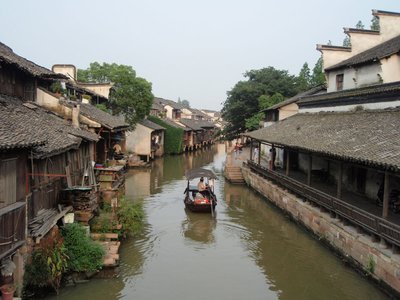 In Chinese, "wu" (乌) means crow or dark, and "zhen" (镇) means a small town. Wuzhen displays its two-thousand-year history in its ancient stone bridges floating on mild water, its stone pathways between the mottled walls and its delicate wood carvings. Also, setting it apart from other towns, it gives a unique experience through its profound cultural background.

It is said that people have lived in Wuzhen for 7,000 years and over time it has produced a galaxy of talents. Mao Dun, an outstanding modern Chinese writer, was born here, and his masterpiece, 'The Lin's Shop', describes vividly the life of Wuzhen. In 1991, Wuzhen was authorized as the Provincial Ancient Town of History and Culture, so ranking first among the six ancient towns south of the Yangtze River. 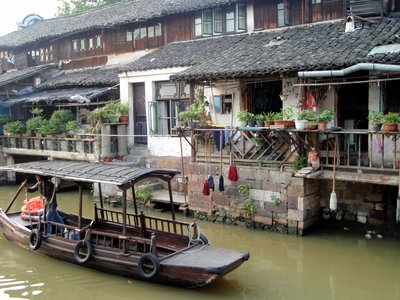 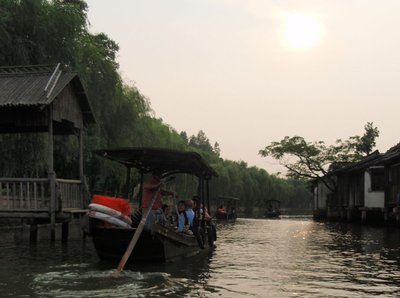 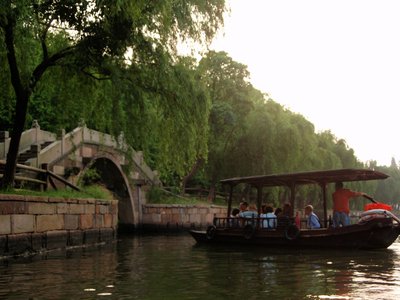 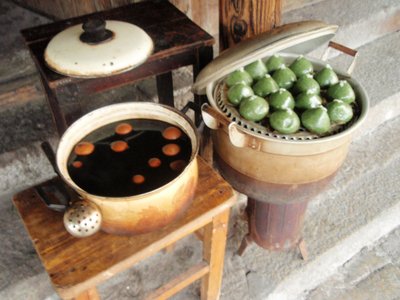 The third day of the journey, we left Hangzhou and headed east to Suzhou and Shanghai.

SUZHOU (蘇州)
Suzhou is located in the south of Jiangsu province, some 50 miles west of Shanghai, along the old Grand Canal. The city has been famous for its gardens for many centuries. According to a Chinese proverb says: “In heaven there is paradise. On earth there are Suzhou and Hangzhou.” Suzhou has also long been noted for its beautiful women. The city is dotted with lakes and ponds connected by a spider's web of canals. And all the canals are lined with whitewashed houses with gray-tiled roofs. 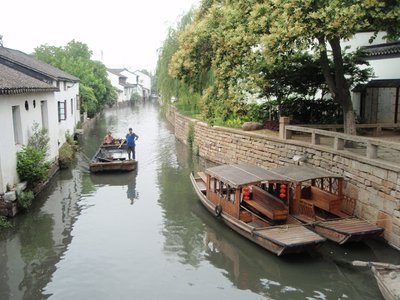 SHANGHAI (上海)
It is the largest city in China in terms of population and one of the largest urban areas in the world. I found it too busy and I don't like it very much in terms of its busiest lifestyle. The day we visited Shanghai was raining. We could not stay in outside too long. We went to the Bund and the Nanjing Road. I don't have much to say about it, to me, it is another busiest city in the world. 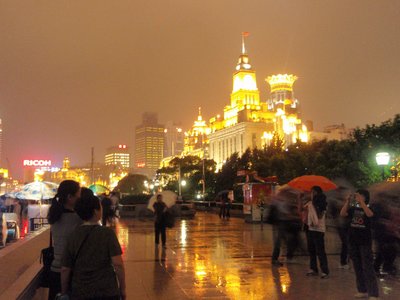 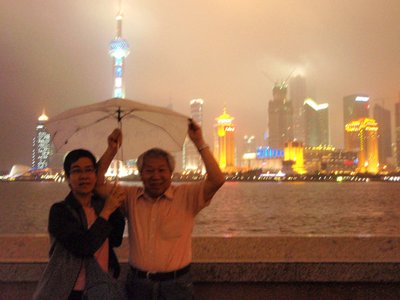 Posted by ristinw 05:22 Archived in China